An exciting new opportunity for young Irish writers!
Cuadrivio, a Mexican literary magazine, is putting together a collection of young Irish writers for the next edition and are seeking submissions from Irish writers under 35 years of age.
You can contact the editor, Joaquin at joaguimar@gmail.com and http://cuadrivio.net   for more information.
Best of luck, and let us know how you get on!
Posted by Irish Writers' Centre at 6:29 AM 1 comment:


In solidarity with all the other arts organisations concerned that funding for the arts might be regarded as less important than other demands on the public purse, the Writers’ Centre is participating wholeheartedly in this Day of Action. We hold that writers and writing are highly effective contributors to our society and our economy, and that some of the income generated by our sector particularly through cultural tourism should be re-invested in the sector to nurture writing for the future and to cultivate a society of readers.

Our action on the day will be as follows:

At 1.00 pm the Chairman of the Irish Writers’ Centre, Jack Harte, will walk from our premises, 19 Parnell Square, accompanied by a piper to lay a wreath at the Garden of Remembrance in honour and in recognition of all the dead generations of writers who contributed to the creation of our state and the formation of our national identity. As part of this ceremony, Liam Mac Uistin will read his poem that is inscribed on the back wall of the Garden and that encapsulates the spirit of this commemorative shrine.

All present will then return to the Writers’ Centre, where writers and members of the public will read short pieces from the writers we are commemorating. For this purpose we are inviting the public in advance to nominate the writers who should be recognised, to choose a suitable poem or piece of prose that is representative of that writer’s work, and to come along and read it on the day. The obvious writers such as Pearse, Connolly, McDonagh, and Plunkett, will be included but we have already nominations for such people as John McGahern, Benedict Kiely, and Kate O’Brien.

The Invitation: Any of our supporters or members of the public who would like to nominate a writer and be considered for participation in this event should submit their proposals, titled Day of Action, to info@writerscentre.ie

More information can be found at http://www.ncfa.ie/
Posted by Irish Writers' Centre at 4:09 AM No comments:

The living and working conditions of artists in the Republic and North of Ireland.

The average professional artist living in the Republic of Ireland earns just €14,500 a year from his or her art, despite having a higher level of formal education than the wider labour force, new research shows.
The data, published this month by the Arts Council and the Arts Council of Northern Ireland, reveals how many artists are now working on the island, and the challenges they face as they pursue their chosen professions.

In the most comprehensive study for a generation, the two Arts Councils have shed critical new light on what it means to be an artist, writer, painter, musician or performer in modern day Ireland, north and south.
The Living and Working Conditions of Artists in the Republic of Ireland and Northern Ireland shows that artists are an exceptionally highly educated group, with over two-thirds having attained a university degree. They are also hard working, putting in more than 55 hours per week and frequently holding down extra jobs to support their creative endeavours.

In stark contrast to their academic achievements and evident commitment, however, the overwhelming majority of artists still earn just two-thirds of the average income for all others workers. Lack of provision for pensions also spells financial hardship ahead for the current generation of artists.
The findings of the report will influence how the Arts Councils continue to provide support and the measures they take to improve conditions for artists on the island.

Here's the full report.
Posted by Irish Writers' Centre at 7:51 AM No comments:

In first place we have Kevin B. Clancy with his poem, 'Otley's Island', and in joint second place we have, Corina Duyn with her autobiographical piece, 'Edvard Munch meets Louis Armstrong' and Jerry O'Shea with his short story, 'Sheila'.

Michael J Farrell was judge, and he was suitably impressed with the talent shown.

What’s the use of a creative writing course?

Pah! If only the business of writing were that simple!

Human beings are a complicated lot and writers themselves are a scruffy, jumbled bag. They write very different things and in very different ways. One thing holds true though, whether you wop words out on the page quicker than a laser-jet printer, or mull over your masterpiece for decades; it’s a long, tough road and you will probably write alone. You may get lonely and self-doubt could well tag along for the ride.

Creative writing courses are a great way to shake off pesky cling-ons of uncertainty and isolation that can be so severe as to make some writers give up completely. The chance to sit in amongst like-minded people who love to shuffle words around and tell stories, coming with their own ideas and angles, can be an invigorating experience not just for a complete beginner, but just as much for a writer who’s been battling along alone for a good while. And a writer at absolutely any stage can meet an inspirational writer or teacher who highlights something about their writing that they could not themselves see.

Want some hard proof of the brilliant revitalising power a writing course can have? No problem…

Poet Jane Clarke took part in a poetry course at the IWC back in 2007 led by Catherine Phil MacCarthy. She sowed the seeds of a poem there, The Lighthouse Keeper, drawing on Catherine’s encouragement to explore persona and to absorb herself completely in someone else’s life

Jane finished the course and abandoned the poem, thinking it was not really working and that she would return to it later. It didn’t happen. That is until, three years later, Jane found herself in another poetry course at the Centre, this time led by Paula Meehan, whose focus was very different; breath, rhythm and line. Inspired once more, Jane rustled through her papers at home, pulled out that poem and reworked it from a new angle. She then submitted it to an international poetry competition, the iYeats Poetry Contest, and won first prize.

Jane, a member of the Airfield Writers’ Group, has been writing for a long time and has had many poems published, but she has no doubt that putting yourself into different, creative experiences can take you in exciting writing directions. So as well as a chance to learn new things, a creative writing course could be just as useful in giving you an external stimulus; to put it another way, a blooming good kick up the typewriter!

Congratulations to Jane on her win and we look forward to seeing more of her work published in the future.
Posted by Donna Sørensen at 7:26 AM 1 comment:

The Irish Writers’ Centre is rebranding and to celebrate the rejuvenation of the Centre they are inviting interested parties to create a new logo for the organisation this summer.
The aim is to portray the sense of community amongst the Prose writers, Poets and Playwrights of Ireland. The winning design will be selected for its innovation and understanding of the concept of the Irish Writers’ Centre. The Centre encourages aspiring and established designers to partake. The logo will be chosen by a panel of judges made up of board and staff members of the Irish Writers’ Centre.
Submissions should be sent to info@writerscentre.ie
Closing date: 20th August 2010
For more details visit http://www.writerscentre.ie/html/logodesign.html
Posted by Irish Writers' Centre at 4:30 PM No comments: 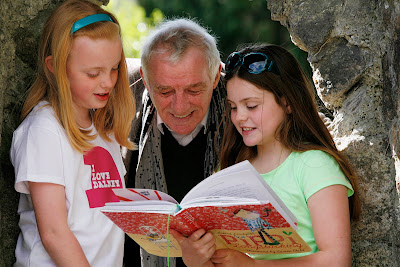 You may still be recovering from your Bloomsday hangovers, but it's worth continuing your literary odyssey, and taking the train out to Dalkey for the first annual Dalkey Book Festival, which starts today. It may be Dublin's newest literary festival, but it's certainly got an impressive line-up, the sheer diversity and innovation of some of the events is pretty impressive. I've been poring over the programme for the last two weeks, and I've compiled a wish list of my fantasy weekend at Dalkey Book Festival. Here it is:
Friday 18th June.
6pm. See The Happy Prince in the Town Hall. Yes, it's aimed primarily at children, but you can never have enough Oscar Wilde and Michael James Ford's adaptation of the story has had fantastic reviews.
Saturday 19th June.
10am. Guided Joycean Walk. Bloomsday may have been on Wednesday, but you can never have enough Joyce. Starting the festival early will also give you the moral highground over the latecomers who show up in the afternoon. Appearing at the heritage centre at 10am shows that you mean business. And it's free.
12pm. Decorate a Cupcake Competition at Select Stores. Select Stores is the mecca of organic foodmarkets. It's almost worth making a pilgrimage out to Dalkey just to visit it... so the prospect of being able to ice cupcakes in such a lovely shop is absolutely irresistable.
1pm. Writing about Art. Bruce Arnold, critic extraordinaire, will be giving a talk about writing on the arts in the Tramyard Gallery. I've tried to write about art repeatedly, and trust me, it's much harder than you might think. Pick up some tips from an expert and enjoy the fabulous art that is displayed in the gallery (including my mother's paintings!!).
2.30pm. Children's Puppet Show. Need I say more?
3pm. At this point, I know that problems will arise due to the fact that two brilliant authors are due to speak at the same time. Marita Conlon-McKenna, who wrote Under the Hawthorn Tree will be doing children's story-telling at the same time that Joseph O'Connor will be reading from his new novel, Ghost Light. I'm torn between the two of them.
6pm After all this literary diversion, a little relaxation might be in order. Luckily, The Irish Times Favourite Wines event is at On The Grapevine, and guess what, it's free. Make the most of the wine tasting, because the evening won't stop here...
10pm. Oh yes, the fun continues, as you're going to be PARTYING WITH ROSS O'CARROLL KELLY! Paul Howard will be doing a reading at The Queens followed by Rosser himself spinning the decks. Fun times.
11.40pm. The partying should be well underway by now, but it's time to get out of the pub and on to the most exciting event of the entire festival. Make your way down to St Begnet's Graveyard (yes, I'm serious) for Midnight Poe, and see Bewley's Cafe Theatre's acclaimed Poe Show in the most eerie setting ever.
Sunday 20th June
11.30am. Make sure you get up in time to catch the wonderful Maeve Binchy, who'll be giving a free talk in Finnegans. Don't miss it, no matter what happened after the Midnight Poe last night.
2.30pm. Ferdia McAnna and Lia Mills will be giving some advice on how to write memoirs. If the weekend has gone according to plan so far, this workshop might come in useful.
6pm. Finish off the weekend with the Midsummer's Night Barbeque at the Fitzpatrick Castle Hotel. There'll be Prosecco on the lawn with barbeque and music, to round off the festival in a suitably summery way.
Check out the festival programme for the complete listings - there were lots of brilliant things that I didn't mention, this being one of the most unashamedly subjective posts ever to taint the archives of the Writers' Centre blog.
Posted by Catriona Gray at 3:46 AM No comments: